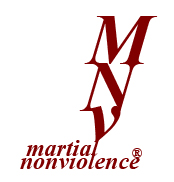 Peace is a martial art of nonviolence. If you'd like to be good at it, you must train regularly, using both your body (action) and words (communication) together to work through the actual bullying and passive aggression of every day life. When someone chooses not to consider your needs before acting, it is common to not know what to say or do next. Martial Nonviolence provides and practices options which increase safety while opening the door to getting everyone what they need.
help edit more_horiz
+examples

Martial Nonviolence® (MNv) refers to a unique somatic conflict facilitation method created by Brandon WilliamsCraig which combines practices and concepts from the martial (aikido), theatrical (improv), and Process Arts (group facilitation) to prepare practitioners to provide co-creative leadership in conflict situations and for systemic revision. Capable of engaging circumstances involving obviously physical conflict and more subtle and systemic violence, the practitioner is a guardian and artist with group inquiry and long-term analysis skills, striving for the redefinition of peace itself as "conflict done well".®

When MNv is deployed as a training curiculum for a particular group, it is referred to as Peace Practices. 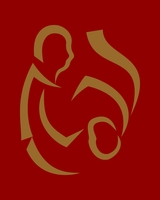 Aikido is often practiced and can be effective as a method of individual self-defense. The physicality of aikido is its beginning, but its founder, Morihei Ueshiba explicitly insisted it be an "art of peace" because it may also be  deeply understood energetically, metaphorically, and practiced at the level of ideas and daily communication. Ueshiba is quoted as having said "we do not train to become powerful or to throw down some opponent. Rather we train in hopes of being of some use, however small our role may be, in the task of bringing peace to mankind around the world.”

MNv begins by practicing Aikido 2.0, which moves from silent movement repatterning into embeding language in every technique, so that one need not choose between physical self-protection and co-creative re-direction. Martial artists move smoothly in whatever way and direction seems best.

Physically sophisticated aikido practitioners often find themselves challenged when the need arises to respond to relational and systemic conflict. Academics and social activists, on the other hand, while focused on systemic injustice often find themselves lacking tools to deal with the energetic and bio-physical realities of conflict. This can lead to a retreat into theoretical abstraction when direct action is required to work for change. This is why, for instance, practitioners of meditation, passive non-violence, and the Process Arts frequently seek out aikido instruction to keep their bodies centered and conscious while responding to hostility.

Please Make Contact, celebrate, struggle, and learn with us!

Question: Hi --- Does your lexicon include phrases for go no sen, sen no sen, and sen sen no sen?

Response: We say "they start, we start, I start" at the simplest level, and "accompany, trigger, and precede" when adding improv to our practice in order to transition into learning facilitation.