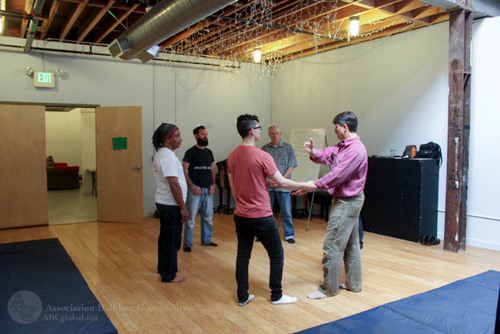 [Upon beginning] "I'm so inspired by what you do.  To me it seems like THE WAY to use aikido now.  I'd love to learn more."

[After a year or so] Dear Sensei Brandon, Thanks so much for making this year more meaningful, interesting and uplifting.  Your teachings have been a great anchor and support over many months and the alignment of mind body and spirit that you show us is profound.  We all increasingly need to be able to do conflict well and we're so fortunate to have you as a guide and living example!

With the support of Association Building Community, we'd like to propose a next phase for the Art of Peace...Aikido 2.0. Begin with traditional aikido body movement learned in silence, but incorporate language and thought explicitly, on the mat, as soon as the basic movements are in place. You don't even need to be an aikido practitioner to begin this work. If you do practice aikido, check this out: Why Call It Aikido 2.0?

Conflicts are always multi-level. What we believe, communicate, and do all matter. One way to understand this is to observe conflict in all its aspects: psychological, physical, systemic, and more--which is to say fully somatic (embodied). Movements and words together form the most accessible gateway to aligning action and intention, so practicing how you conflict is really the only way to be able to use both movement and communication smoothly under pressure. If you practice all kinds of conflict as though you were practicing a martial art that celebrates difference rather than harming any opposition, then conflict itself changes to become more humane. As Morihei Ueshiba, the founder of aikido, made clear, the purpose is not to throw down some opponent but to transform conflict in the world. Why not practice that in every dojo, at very least? Why not in every family and organization?

Please subscribe to our email list and Zoom classes, and find us on Facebook to learn about others who are exploring this work. Here is a recent response from an expert:

"Brandon Sensei is immensely thoughtful and clear as he shares his approach to Aikido. He’s not only creative but also what he’s teaching and developing in his Aikido practice is what our world needs now. He is passionate about what he’s doing, and truly cares that his students understand and GET what he’s teaching. I so appreciate how Brandon has put together Conflict Done Well and Peace Practices as a way to teach all people Aikido principles in both a physical and mental way. Everything in his most recent Brazil seminar made perfect sense to me and flowed beautifully. This work in the world is much needed and so valuable!"

Not a faster or more deadly physical martial art...
Not the aikido name used to refer to software...
Not using the web to make your dojo more visible (though this is good too)...
Instead, the next step in the direction the founder of aikido intended: changing the world beyond the dojo for the better by changing how conflict works.

Thereafter, when you are ready, move beyond even Aikido 2.0 to learn the real-time improvisation and facilitation skills of Martial Nonviolence. Learn the whole Conflict Done Well system and become a conflict professional. Perhaps you might like to become a Peace Practices Instructor.