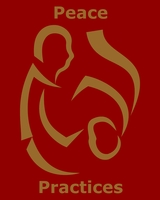 Website: PeacePractices.org
Social Media: Cause ~ Facebook ~ Twitter
Video: YouTube
Much is said about the value of empathy and the need to cultivate habits of nonviolence which lead to Peace. At the same time, it is very rare to find truly humane and co-creative environments which insist on the daily practice of peace in order to actually achieve this end. Through the local non-profit, Association Building Community, the Peace Practices curriculum was offered for the first time in 2009 at The Renaissance School, a Montessori learning environment in Oakland, CA. We opened a door there through which even the most scattered and conflicted children and families walked to learn habits of peaceful interaction. Peaceful ways of working through conflict and difference have always been one of the traditional pillars of learning and of Montessori education in particular.
In May 2014 we received three years of international funding and began the next phase, our local launch in partnership with Pacific Rim International School in Emeryville and San Mateo, CA. In 2016, we began working with Beacon Day School in Oakland. For more, please visit Association Building Community's Peace Practices page. In 2016, the second of three years of promised funding, the foundation supporting us failed, and we became unable to support our administration. Some classes continue, but our infrastructure had to be disassembled while we search for a more sustainable funding model. Now is the ideal time to offer your support and help us multiply our impact.

Brandon WilliamsCraig, Ph.D.is the founder, primary creative force, and chief executive for Culturesmith partnerships, consulting, and services. Working across domains by blending many areas of expertise, his professional work in the last decade alone has included:

Born and raised in Dallas, Texas, his first career was in performance, in both the professional regional and touring theater, and as a vocalist in jazz and liturgical music. His Ph.D. in mythological studies and depth psychology from Pacifica Graduate Institute combines psychology, literature, and religious studies to demonstrate the indispensable interoperability of the humanities with social science and organizational development. His teaching and research focuses on the history and literature of psychology, the psychology of literature, the embodied (somatic) psychology of belief, the narrative construction of culture, The Myth of Peace, and the Process Arts.

Brandon has extensive experience contributing to the leadership of and teamwork within private and public institutions, accepts executive positions corp-to-corp and as a contractor or employee, offers leadership and facilitation training, and has worked in the study of peace and conflict since 1998, as well as providing curriculum development, conflict education, and community mediation services.

Brandon Sensei is a 5th degree blackbelt in aikido. He was founder/Chief Instructor of Free Aiki Dojo and served as Chief Instructor of Golden Bears Aikido at UC Berkeley. He is also an un-ranked (not yet licensed to teach) member of the Takamura ha Shindo Yoshin Kai, a classical budo ​school (koryu) directed by Kaicho Toby Threadgill, which includes weapon training and tactics associated with the warrior class of late Edo period Japan. This style of jujutsu ​influences his aikido and all of his martial and somatic learning.

Brandon's body-based facilitation method, called Martial Nonviolence, pairs traditional aikido, professional theater techniques, and real-time facilitation, and is the heart of the work presented and developed at Culturesmith.com. His somatics students learn to Embody Nonviolence through somatic conflict resolution. His clients focused on leadership, management, and administration practice Conflict Done Well. MNv also powers an internationally funded Peace Practices curriculum being offered by ABC and practiced by students from 4 to 84 years of age in Montessori, public, and private schools. Brandon resides in Texas with his wife and two children, and consults nationally and internationally.

As long as there have been martial arts, a minority of practitioners have carried forward the work of directly applying the conflict skills learned on the mat to situations that reach well beyond. Aiki Extensions, for instance, is an excellent contemporary example of aikido practitioners joining together to amplify the purpose of that art, as made explicitly clear by the founder, making a martial art into a process art for the benefit of the world.