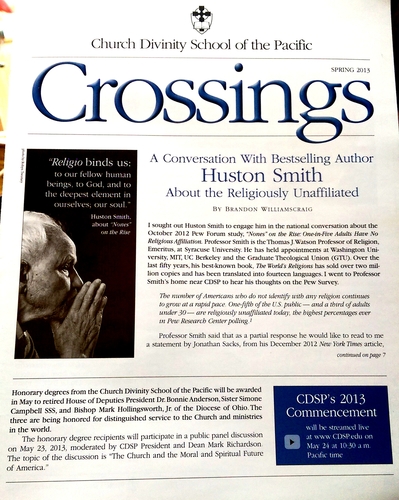 Huston Smith was the Thomas J. Watson Professor of Religion, Emeritus, at Syracuse University. He held appointments at Washington University, MIT, and UC Berkeley, and worked with and learned from many of the most well-regarded religious leaders and thinkers the world over. His universally recognized The World’s Religions: Our Great Wisdom Traditions has sold over two million copies, carrying with it a sympathetic inquiry into the wisdom traditions associated with the most widely practiced contemporary religions. His fourteen books, as well as myriad public lectures, recordings, and essays each bring to the consideration of belief and religious philosophy a spirit of respectful but thoroughgoing inquiry which allows curiosity to bring faith and ignorance into an honest and respectful relationship with the hope of enlivening human experience and the capacity to love with deep compassion.

On February 5th, 2013, I had the privilege of asking Professor Smith for his thoughts on the October 2012 Pew Forum study, “Nones” on the Rise: One-in-Five Adults Have No Religious Affiliation. The Executive Summary of that poll begins, and my interview with Professor Smith began, here:

The number of Americans who do not identify with any religion continues to grow at a rapid pace. One-fifth of the U.S. public – and a third of adults under 30 – are religiously unaffiliated today, the highest percentages ever in Pew Research Center polling.

On being asked for his thoughts on this departure from religious self-identification, Professor Smith began his response by reading aloud a December 2012 New York Times article, "The Moral Animal," by Jonathan Sacks [audio through 14:30]. The article begins:

At first glance, religion is in decline. In Britain, the results of the 2011 national census have just been published. They show that a quarter of the population claims to have no religion, almost double the figure 10 years ago. And though the United States remains the most religious country in the West, 20 percent declare themselves without religious affiliation — double the number a generation ago. Looked at another way, though, the figures tell a different story. Since the 18th century, many Western intellectuals have predicted religion’s imminent demise. Yet after a series of withering attacks, most recently by the new atheists, including Sam Harris, Richard Dawkins and the late Christopher Hitchens, still in Britain three in four people, and in America four in five, declare allegiance to a religious faith. That, in an age of science, is what is truly surprising.

Following the October Pew poll, Sacks is almost certainly offering a response to its findings and what sounds like yet another death knell for religion. He makes a strong statement for religion's social value, proposing not only that it reflects a biologically hard-wired altruism, but also that religion encourages the expression of altruism necessary for the building of Community. Sacks concludes, and Smith strongly agrees, that "religion is the best antidote to the individualism of the consumer age. The idea that society can do without it flies in the face of history and, now, evolutionary biology."

Acknowledging this often asserted value associated with the practice of religion, I drew to Professor Smith's attention a parallel conclusion from the Pew polling, which is to say that "most religiously unaffiliated Americans think that churches and other religious institutions benefit society by strengthening community bonds and aiding the poor." However, despite the benefits and "with few exceptions, ... the unaffiliated say they are not looking for a religion that would be right for them. Overwhelmingly, they think that religious organizations are too concerned with money and power, too focused on rules and too involved in politics."

Professor Smith agreed that institutions are problematic, but asked whether the poll's respondents were rejecting institution or religious tradition itself. It seems clear from the data that "the overwhelming majority of the “nones” were brought up in a religious tradition...about three-quarters of unaffiliated adults were raised with some affiliation (74%)." The idea of jettisoning religious traditions because of the dilemmas Smith associates with institutions, of all kinds, causes him considerable consternation, but he was drawn to sit in silence for quite some time considering the idea that two-thirds of the 46 million unaffiliated adults in the U.S. who identify themselves as "religious or spiritual in some way" also: 68% believe in God, and 58% "say they often feel a deep connection with nature and the earth." One-in-five prays every day. Thirty-seven percent "classify themselves as 'spiritual' but not 'religious.'

"Spiritual but not Religious" triggers a reaction in Smith similar to the argument in his Why Religion Matters (p 255), where the phrase is used to represent what is lost in the "New Age" when the new beginning made possible by religious tradition is thrown out with the more oily water of institution. In both his book and our interview, Dr. Smith turned to the White House scandal of the late 1990's to illustrate his frustration. President Clinton said publicly that he had "sinned" in an effort to convey his remorse and intention to change for the better. Monica Lewinsky, when asked if she felt similarly, rather than speaking about her responsibility side-stepped the premise by suggesting “I am not very religious. I am more spiritual.” Among Professor Smith's concerns is that the importance of "feeling good about oneself,"  which he associates with "spirituality," far overshadows the drive to become a more loving human being, which he associates with religion. He suggested to me that, beneath the social benefits which are demonstrably associated with participating in religion, the humanizing expectations of religion practiced honestly run deep, reinforced by the image of divinity or divinities, by whatever name.

In Smith's words, "our traditions shape us," and it is an image of God into which shape we ought desire to be formed more than into our own idea of self. "Religio binds us: to our fellow human beings, to God, and to the deepest element in ourselves; our soul." When I suggested that people seemed to be trying to do the work of that binding without the aid of institutions and traditions, Professor Smith's response was simply "Good Luck! All institutions are morally ambivalent, having down and up-sides...but religion is basically good and we are as our traditions have shaped us." It is this beneficial shaping of persons and cultural narratives which he sees as primarily at risk in the demographic sample the poll reflects. Especially given the near impossibility of total departure from the shapes religion has made, Smith insists that it would be better to be "Ands" rather than "Nones."

A concern with jettisoning "sin," for instance, and thereby an opportunity to behave more admirably, is only the beginning of what Professor Smith fears has been sacrificed when the loss of religious tradition is the price of atoning for the excesses of institution. Other humanizing aspects of religious practice are even more important and include mysteries which cannot be easily uncovered by reductive tools such as statistical polling. Other well-known comparativists, such as Joseph Campbell, for instance, are often accused of essentializing and thereby losing the particularity of the traditions they describe in general terms. When Professor Smith suggests there are central, perennial values associated with long-standing religious wisdom traditions, he is sometimes misunderstood as suggesting that the values associated with religion may be extracted from and practiced without the need for specific religious traditions, a kind of post-secular humanism.

Wondering if Professor Smith sees the Pew poll pointing in this direction or away from it, I paraphrased a particularly provocative idea I had heard him offer during a public talk we conducted together. He had suggested that thinking of religion in terms of a reduction to the mininum values necessary to operationalize social and spiritual benefit is too mechanical. This approach wholly misses the beauty and mystery that make for a deep, poetic understanding that both private and communal worship can bring to human beings. "Esoterically,...religions are one, like the kernel inside the walnut." This metaphor also appears (at least) in Smith's Is There A Universal Grammar of Religion, The Soul of Christianity, and Tales of Wonder. Smith went on to explain that, as the institutional shell of any religious nut may look very different from its fellows, universally nourishing meat continues to be available within. But protein the body needs is not all there is to true nourishment of the whole person. The whole process matters and contains complex and dynamic relationships which are not reducible to efficiencies, much less a lowest common denominator.

I sent this article to Professor Smith and received his approval to frame the conversation in the way you are reading here. As problematized by Smith in our public events, I have come to refer to attempts to boil down religion for its "personal growth" and socially acceptable values as "committing the sin of efficiency," which is at least part of the danger of divorcing belief in God, a feeling of deep connection with nature and the earth, and prayer from the specific context of original traditions. Classifying oneself as 'spiritual' but not 'religious' may offer new freedom of exploration but also seems to put one in danger of foreclosing understanding of how the two are inextricably and beneficially related. The problematic and deeply satisfying maturity of understanding that can come from ongoing poetic and communal relationship with Divine Mysteries is what may be lost. In his 93rd year, it is this loss that Huston Smith lovingly warns us against.

Please add your thoughts here. We reserve the right to remove anything unhelpful.